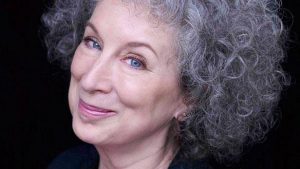 I quote Margaret Atwood when introducing my poem Free (2006).

If you were around for Trump’s election as President of the United States you may have seen among the throngs of people who were participating in the thousands of Women’s Marches around the world some placards that read “The Handmaid’s Tale is not an instruction manual”.  And for those of you who love Netflix, you may have come across “The Handmaid’s Tale”, the TV series.

Margaret Atwood is the woman who back in 1985 created the Republic of Gilead, the character of Offred, the frightening red capes of the Handmaids and the dignified blue dresses of the Wives. Published a year after Orwell’s infamous dystopia was meant to have been set, The Handmaid’s Tale portrays a different kind of dystopia, one of a theocratic dictatorship in a future United States of America where women have been stripped of all freedom and independence. Women’s existence has been reduced to simply that of their reproductive functions, for those who can still reproduce (the Handmaids), whereas the rest only exist and are defined by their relationship to the men who shape the world around them (the Wives, the Econowives, and the Marthas who cook and clean in the houses of the male Commanders).

But what’s really terrifying about The Handmaid’s Tale is that whilst it is fiction, none of the different and distressing ways in which women are subjugated and oppressed in the Republic of Gilead are actually made up. All of the abuse described actually happened in real life somewhere, at some point in time. Margaret Atwood “simply” wove together an intensely perturbing universe from threads of horrifying realities to create a fantastically unique tapestry in the attempt to remind us that unfortunately nothing is out of the realms of the possible, that we should take nothing for granted and instead constantly keep watch of and be engaged in protecting the values and principles that we hold dear. So that we may never wake up one day to find that the meaning of phrases like “for our own protection” have been subverted; so that we may never find ourselves in a situation where the notion of “freedom to” has been extinguished and has given way to the singular notion of “freedom from”.

“Women were not protected then.

I remember the rules, rules that were never spelled out but that every woman knew: don’t open your door to a stranger, even if he says he is the police. Make him slide his ID under the door. Don’t stop on the road to help a motorist pretending to be in trouble. Keep the locks on and keep going. If anyone whistles, don’t turn to look. Don’t go into a laundromat, by yourself, at night…

Now we walk along the same street, in red pairs, and no man shouts obscenities at us, speaks to us, touches us. No one whistles.

There is more than one kind of freedom, said Aunt Lydia. Freedom to and freedom from. In the days of anarchy, it was freedom to. Now you are being given freedom from. Don’t underrate it.”

Frightening isn’t it? It’s the usual recipe of dictatorships – a promise to greater security attainable only if individuals accept to relinquish their freedom and power, and denounce anything deemed “unordinary” or “different”; for these words are suddenly made to mean “threatening” and “traitorous”. And at a time of rising populism, nationalism, and widespread disenchantment with technocrats and their institutions, so the spectre of decisive leaders who would rather take a stand and act, however impulsively or foolishly, rather than take a balanced stance in delicate debates is rising across Europe and the United States, Latin America and China. And so The Handmaid’s Tale suddenly takes on a newfound relevance.

So let’s take heed of Margaret Atwood’s chilling warning and not rest on our laurels; for as Alice Walker says: “the most common way people give up their power is by thinking they don’t have any.” Engaging in anything that is close to your heart, addressing any issue that matters to you, irrespective of what it is, is better than not doing anything, than thinking “what difference can I really make”, than thinking “others will surely take care of it”, or thinking that our politicians can’t really be that egotistic, power-hungry and shortsighted.

For as Margaret Atwood’s novel highlights, we can’t afford to believe that none of this could ever happen here, to us; for no one ever believes it might happen until it does.

“We lived, as usual, by ignoring. Ignoring isn’t the same as ignorance, you have to work at it.

Nothing changes instantaneously: in a gradually heating bathtub you’d be boiled to death before you knew it. There were stories in the newspapers, of course…but they were about other women, and the men who did such things were other men…The newspaper stories were like dreams to us, bad dreams dreamt by others. How awful, we would say, and they were, but they were awful without being believable. They were too melodramatic, they had a dimension that was not the dimension of our lives.

And that is one of the many things that I love about literature; that it can express the deeply intimate, the profoundly personal, and yet can also act as a collective conscience and spur us to action. It is no coincidence that throughout history one of despots’ most popular tool of control has been the destruction of literature and the reduction of language. For words have power and language births thought.

This is by no means meant to be a patronising lecture; what might be misperceived as the condescending zeal of a mad university professor are simply the sentiments that The Handmaid’s Tale has stirred in me. They are a reflection of how superbly Margaret Atwood evokes the horrors of total tyranny, how boldly she demonstrates that our “normal” realities can be overturned into outlandish nightmares in a frighteningly quick manner, and how – as Offred notes when she stares at the Japanese tourists – how quickly we adapt to these new “truths” to the best of our abilities in order to survive.

“They’re tourists, from Japan it looks like…and I can’t help staring. It’s been a long time since I’ve seen skirts that short on women. The skirts reach just below the knee…Their heads are uncovered and their hair too is exposed, in all its darkness and sexuality. They wear lipstick, red…

We are fascinated, but also repelled. They seem undressed. It has taken so little time to change our minds, about things like this.

Then I think: I used to dress like that. That was freedom.”

Like George Orwell’s 1984 and Animal Farm or Arthur Miller’s The Crucible, Margaret Atwood’s The Handmaid’s Tale impels us to guard against the slippery slope of totalitarianism and, in my view, arouses our sense of civic duty far more convincingly than any politics degree or politician’s speech.

So whether you like fiction or politics, I would urge you to read The Handmaid’s Tale, for it holds lessons on both and makes them one and the same; for ultimately, like Picasso once said, “art is the lie that enables us to realize the truth.”

Back to Poets & Writers